A long time ago in a galaxy far far away…. Well actually it was only just recently and in Tasmania!!

I have always been a geek and a bit quirky. But before having my two boys I was never into star wars. I even refused to watch the movies because I thought they’d be boring!! I loved Star Trek and I’d always heard you could never be fans of both.

Falling pregnant changed all of that! My first born is even named after George Lucas and Luke Skywalker (he’s named Lucas and yes he was actually named after Star Wars. His father wanted him to be called Anakin but I did not want him going to the Dark Side).

Fast forward 10 years and with two boys who are HUGE Star Wars fans I decided to join forces with them and become a big fan too.


Last week I received the most amazing fabric from a local supplier and I knew not a drop would be going to waste.

It is always super hard to cut into new fabric…. It usually takes me a few cups of coffee before I can muster up the courage.  First I decided to treat myself to a new dress for work, because owning over 70 outfits is not enough!!

My all time favourite dress pattern is the Miss Ruby Tuesday Dress from 1 Puddle Lane but I wanted a maxi dress so I used the Bodice from the MRT dress and altered
the Heartlight Skirt from Pattern Emporium. I overlapped the MRT skirt pattern and the heartlight so that I could get the right shape and width for the waist of the skirt. Otherwise the bodice would not fit onto the skirt smoothly.

I also love doing weights and I’ve found my weights are perfect for keeping pattern pieces in place on fabric (I really hate pinning patterns) and I look at the results. I love my very funky C3P0 dress and I can’t wait to wear this to work. There are some big Star Wars fans at school.

My youngest boy Noah has fortunately inherited my quirky dress style. Poor Lucas can get a little embarrassed to be seen with me sometimes. Just last week he refused to walk through the school yard with me…. I really didn’t see what all the fuss was about, Doesn’t every mum wear a dino onesie for school drop off?  (it was actually wear your pjs to work for me)

Noah asked if I could make him some pants. He chose the fabric and I used the Domi Sweat pattern for his pants… I could have cried once I had finished and discovered that the R2D2 fabric was actually upside down!! This was totally my fault as I was rushing and didn’t look at the direction of the print before cutting the pattern pieces out.. luckily Noah is very good at leg kicks so I’ll just pretend it was intentional.

I thought that the star wars fabric was so fantastic that surely Lucas would love whatever I made him if I was using this fabric. Unfortunately that wasn’t the case. He told me they were awesome, just not his style…It’s a good thing we are pretty much the same size (well I fit into all of his clothes which is one big reason why I struggle not being able to make him things,I just think of all the clothes we could be sharing!) So now I have some very funky and super comfy pants too.

I couldn’t stop there!! Once again I thought I might try and make Lucas something with this seriously epic fabric. Unfortunately the size 12/14 turned out rather smaller than I had expected.. it was even too small for me 🙁

Noah was quick to claim the Halla Starlight hoodie and although it’s a little big it will mean he’ll get lots of wear out of it. Wearing the pants and top together does make them look a bit like pjs (or a onesie) but that doesn’t seem to bother him

And I’m not finished yet! I have just enough fabric left to make a bomber jacket for Noah. I’m planning on adding one of my appliques to the back of it, but that will have to wait until my zips arrive in the mail. Little Noah will look awesome if he chooses to wear them all at once. I may have to paint BB8 and R2D2 onto some shoes for him just to complete his outfit. 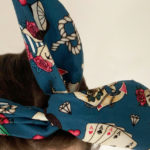 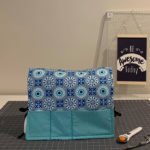 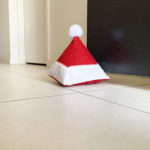 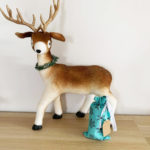 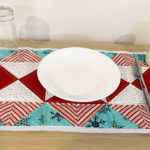